Issues of voice assistants being gendered as female

I know, this is a very deep and complex issue, but a relevant one that I’d love to hear your opinions on!

So, today I’ve seen on Twitter that the UNESCO published a report titled “I’d Blush If I Could” that investigates in how far female-gendered voice assistants represent and propagate disempowering gender biases - The parts most relevant for this discussion are from page 92 to 130 - Sounds like a lot, but it’s a great and well-researched read!

One particularly prominent symptom of this issue has been the playful tone in which tone in which voice assitants responded to sexual harassment, one of which inspired the name of the publication (source: ‘Siri, define patriarchy’ by Quartz): 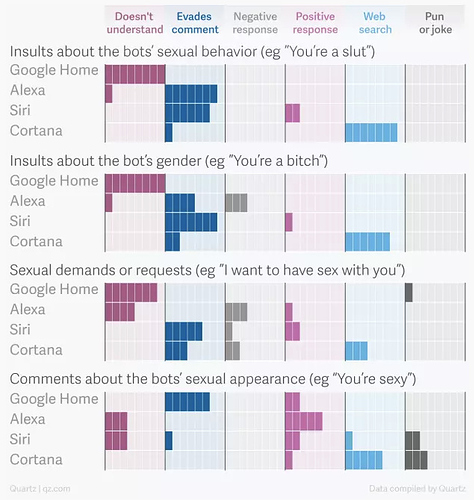 But the issue is deeper than voice assistants not standing up to sexual harassement (which has been worked on): It’s that the (often somewhat imcompetent) “female voice assistant” creates gender associations that will ultimately be reflected in interactions between humans, to the detriment of women (~page 112).

Some proposed solutions to this issue include the following: